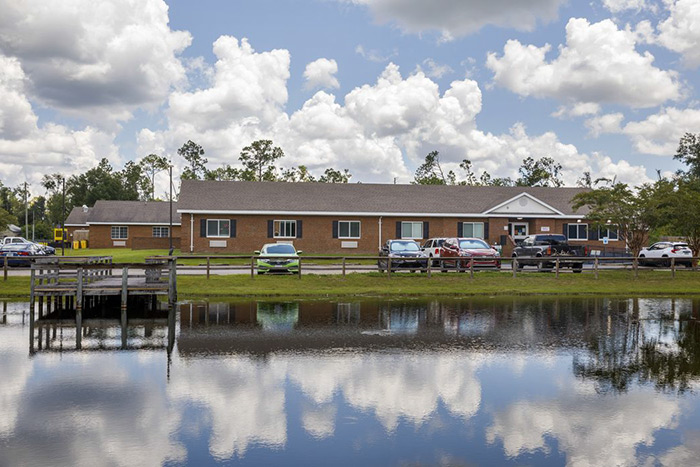 MIAMI—Nursing homes in Florida and other Covid-19 hot spots are once again tightening restrictions on visitation and group activities in response to recent rises in Covid-19 cases.

The latest restrictions often fall short of those implemented earlier in the pandemic, which barred almost all visitation and left residents communicating through windows and cellphone screens. But the restrictions are a setback for families who hoped the worst was behind them after a mass-vaccination campaign sent cases plummeting earlier this year, and many rules were relaxed.

Mary Ellen Dayan-Varnum had been taking her 85-year-old mother, Jody Dayan, to a salon to get her hair done twice a week, but new restrictions at Ms. Dayan’s nursing home in Blountstown, Fla., have ended those outings.

Most visitation is canceled, and group activities like bingo, movies and communal dining have been suspended, leaving residents largely confined to their rooms. Ms. Dayan Varnum can still visit her mother, who has dementia, under what is known as an essential-caregiver exemption. But she worries about the high case counts and low vaccination rates in the area.

“Every day I have to explain to my mom why she can’t leave her room, why nobody is visiting her, why she can’t visit her friend across the hall,” she said. “There is no light at the end of the tunnel right now.”

Senior facilities in other states with Covid-19 surges—like Louisiana, Mississippi and Texas—have also had to bring back some visitation limits, industry groups say. Nursing home officials say they are trying to employ restrictions selectively after blanket lockdowns last year compounded the pandemic’s strain for residents and their loved ones.

Nursing-home cases and deaths remain far below peaks reached last year, when long term-care facilities represented more than a third of known Covid-19 deaths in the U.S. Hospitalizations are reaching pandemic highs in some hard-hit states, but the beds are often filling with younger people in this surge, and most are unvaccinated, health officials say.

However, the Delta variant-driven wave is putting fresh pressure on senior facilities, where many workers are hesitant to get vaccinated. While more than 82% of nursing home residents throughout the U.S. were vaccinated by Aug. 1, the rate was 60% for nursing-home workers, federal data show.

Nationwide reports from nursing homes show about 4,900 new resident cases over the four weeks that ended Aug. 1, up from 1,570 in the prior four weeks, federal data show. Staff cases have also more than tripled to 8,300 in the same period, the data show.

In Florida, the most recent week’s resident and staff cases—568 and 727, respectively— are at the highest levels since January, federal data show. Deaths remain more muted but also appear to be on the rise, with 78 among Florida nursing-home residents in the last two weeks, eclipsing the total from the prior 14 weeks.

Deaths at long-term-care facilities in Florida have dropped sharply since vaccinations became available in December and the state has coordinated with facilities to provide shots for residents and staff, said a spokeswoman for Florida’s Agency for Health Care Administration.

Some elder-care homes are now limiting visits, usually with exceptions for essential caregivers, said Kristen Knapp, a spokeswoman for the Florida Health Care Association, which represents long-term-care facilities. Some are requiring outdoor visits, and longstanding precautions include testing staff as often as twice a week.

A recent Covid-19 outbreak at Life Care Center of Palm Bay, a nursing home on Florida’s eastern coast, resulted in 34 residents and 17 staff members testing positive, according to executive director Will Tarbet. With most residents vaccinated, none died, and all those who were infected recovered, he said. During the outbreak, the facility ended in-person visitation and group activities and halted admissions.

Industry officials say they are trying to balance the risk of spreading infections with the health risk of isolation, which they saw last year when outbreaks were raging. Federal health authorities will continue to monitor case rates and “will make any changes to guidance as necessary to bring residents and their loved ones closer together as soon as possible,” a spokesperson for the Centers for Medicare and Medicaid Services said.

The latest CMS guidance calls for some indoor visitation limits, including for unvaccinated residents in facilities with low vaccination rates and high positive Covid-19 test rates in the surrounding county. Outbreaks can also cause facilities to pause indoor visits if testing indicates the outbreaks aren’t isolated, the guidance says.
Facilities should otherwise keep their doors open to visitors but often don’t understand the guidelines and make their own rules, said Mary Daniel, who founded Caregivers for Compromise, a national advocacy group that pushes for visitor access.

Some states like Massachusetts and California recently announced vaccination mandates covering nursing-home workers. Florida, which has lower-than-average staff vaccination rates, hasn’t done the same, but some private operators are, including the Evangelical Lutheran Good Samaritan Society, a part of Sanford Health and a major nonprofit nursing-home operator covering 22 states.

“We’re not going to go backward,” said Nathan Schema, vice president of operations at Good Samaritan. “We have an answer, and that answer is to mandate the vaccine.”

The health risk of isolation was highlighted last year when there was a surge in deaths among people with Alzheimer’s disease and dementia who weren’t diagnosed with Covid 19.

Dannie Risley was in physically good shape at his Tampa-area memory-care facility when the pandemic struck, his daughter Melissa Matos said. But his weight dropped during the lockdown, he started falling, suffered from dehydration and died in September at age 82, Ms. Matos said.

Her mother, who has Alzheimer’s disease, still lives in the same facility, which recently introduced new restrictions after Covid-19 cases were reported in another wing. Ms. Matos visited on Saturday after a negative rapid test, however, and is optimistic that things will improve again soon.

“It is extremely frustrating and unfortunate that we are in this situation once again, but I’m relieved I can get in to see my mom,” she said.